One of the last instalments of the work of Golnaz Behrouznia drove her to the CIRPAC, the International Center of Research of the Stone, Arts and Culture.
Looking at the works created during this residence, the immediate reaction of the audience leads to compare the works with fossil fuels. As if the work of Golnaz on the living did leave a trace on the stone that the public would discover.

The first stage of the work – where Golnaz Behrouznia carved a dozen pieces during her three weeks residence, with the help of  François-Xavier Poulaillon and visual artist Matthew Fappani - could be the culmination. The forms that the artist has carved are in effect from a fictitious biological universe that she developed over the years. But are these fingerprints also something other than "evidence in the stone"? It is a question that may be asked, as it would be unsatisfactory for the mind to consider these dense sculptures, picked and concise, as only the flash-back of an existing work.
In summary, and to reformulate the question, are the stone sculptures made by Golnaz something other than traces, and do they open other doors to her practice?

Looking at two of her sculptures in white marble, this beautiful white marble from Saint-Béat, which has built its reputation since the Roman Empire, we will notice the black highlight credited to the rotring on the outline of the artwork. And in particular on this exhibit which puts face to face two of its chimeras, whose filamentous extensions clearly evoke the wired connections which our electronic devices are covered. What one sees clearly goes beyond the fossil’s domain, due firstly to these highlights, and secondly due to the intricate details within the sculpted connectique – apart from thinking that it could be traces left by a very ancient civilization, disappeared several hundreds of millions of years ago. Other carved pieces by Golnaz show that the artist has not simply reproduced her vocabulary of forms in the stone.

As a result, there is no contradiction between the stone and the living, since some formations, as the stromatolites, are coming from bacteria. And if this apparent contradiction between the stone and the living is resolved, why not solve also this apparent contradiction between the stone and electronic?  Traces of connections within some sculptures by Behrouznia would then be the stone voltage in a future age, which would match this concretion of the organic past in the hard stone and apparently inert. The stone as a material, even if it pushes  Golnaz Behrouznia to rethink her repertoire of forms,  also leads us to resolve the apparent temporal paradoxes which the practice of stone sculpture would be disabled. Her biological fiction would be a land particularly fruitful in the stone - which by its very nature accentuates the traps that our senses offer us.
Yes, the stone is hard and seems eternal, but previously one day, it was for some of them, only a cluster of tiny bacteria producing limestone to protect themselves! This limestone, through warmings and cuts has been able to become marble. For Golnaz Behrouznia, this marble can become a communicating medium. Would then contradictions between the long time of the stone, and the short time, always shorter of computer and electronics be resolved?

We go back to the question of whether this is art, and why is it art? In the current logomachy which feed some artists and academics, according to which "the art interrogates the science", there is a lot of naivety and a lot of laziness of thought. As if  writing the word "queries" sufficed to really examine. The art can question, and in a contemporary practice, it is always more interesting when it questions.

The practice of Golnaz Behrouznia, at her three weeks residence at the CIRPAC, shows how an artist can enroll in a both scientific and artistic approach, pointing the finger to apparent paradoxes, like the ones putting on the same level the long time and the short time, the mineral and the living, the natural and the artificial. The scientific thinking does not stop at appearances, but proceeds by assumptions and quantifiable and reproducible audits. When it dares to propose "fictions", it is to better understand the reality of the physical universe.

The work of an artist like Golnaz Behrouznia is located in this line, with her biological fictions, which exceed the time snapshot, and which prefigure the future time.

Is that what her art would not be, finally, a way to raise awareness about each different time scales in which we live? Does her art help us to get out of the thin capsule of the Present, in which we are imprisoned? Art reminds us of a buried reality, and frees us in bringing us to a new reality.

Perhaps that is why the stone sculptures of Golnaz Behrouznia create this feeling of recognition, because they remind us of a past time, and they call for a future time, providing an appeasement to this torture of the human conscience, who is aware of the body moving within a short time, so short, whereas the miracles of the mind open the channels of the quasi-eternity.

​-----
...If the spectators realise that we speak to them about the origins of life, they also know a thing, it’s art and not science. So how, apart from the context in which we see these works - galleries, art centers - do we know that this is art, and not an anatomical plank? Some are confident that what they see is indeed the trace of a living organism. They don’t find it less beautiful or interesting, even if they see the work in an art center, they continue to believe that it is a documentation.
A good question that we could ask would be to know why it is art. As many artists use as base material the everyday’s news, for example, or nature, art can not be labelled by the real or fictitious element that inspired the work.
So let us keep in mind the answer to this question, and moving further, with Golnaz Behrouznia, at the end of a Pyrenean valley, in Saint Beat...
​
Xavier Malbreil / June 2014
Les formes que l’artiste a sculptées sont en effet issues de l’univers de fiction biologique qu’elle tisse au fil des années. Mais ces empreintes sont-elles aussi autre chose que des « preuves par la pierre »?
C’est une question que l’on peut se poser, tant il serait peu satisfaisant pour l’esprit de considérer ces sculptures denses, ramassées, concises, comme uniquement le flash-back de l’œuvre existante.
En un mot, et pour reformuler la question, les sculptures dans la pierre faites par Golnaz sont-elles autre chose que des empreintes, et ouvrent-elles d’autres portes dans sa pratique ?»
Xavier Malbreil 2014
Read more about Apparitions 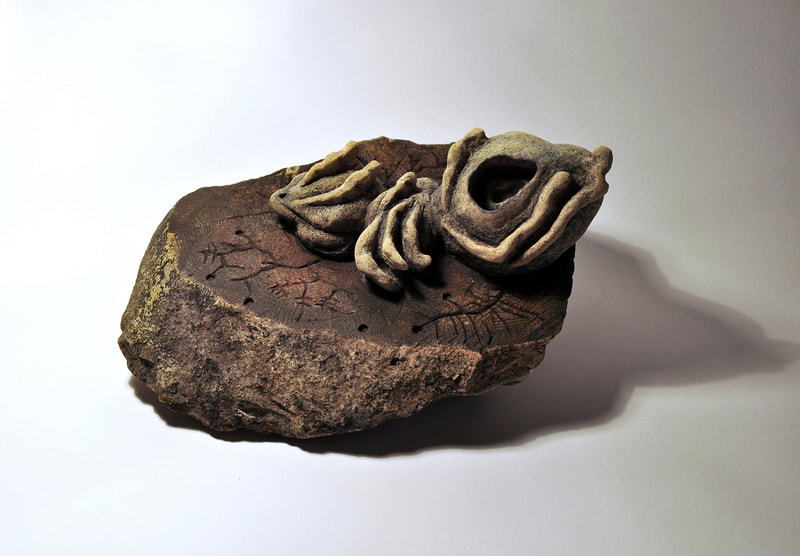 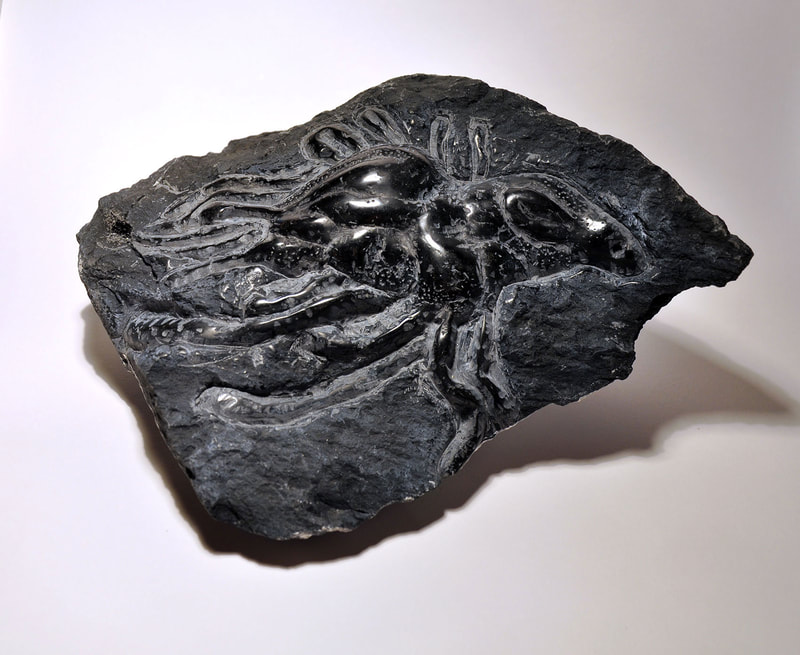 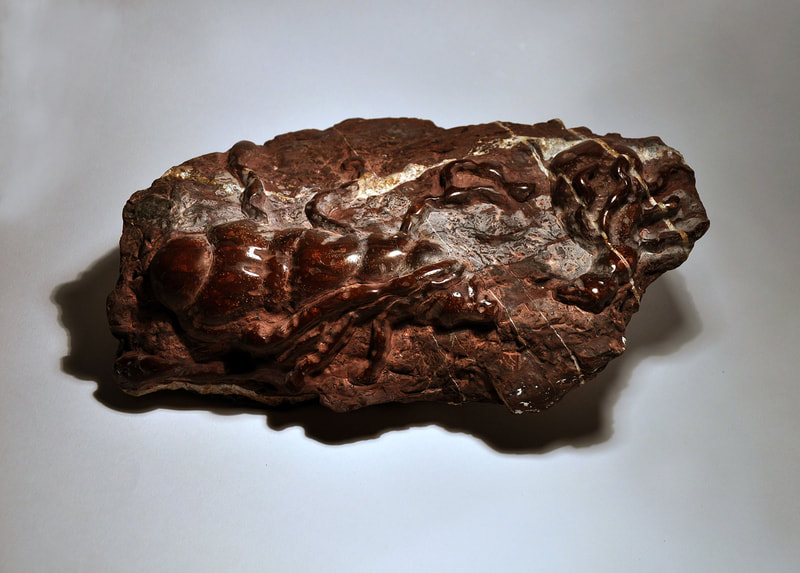 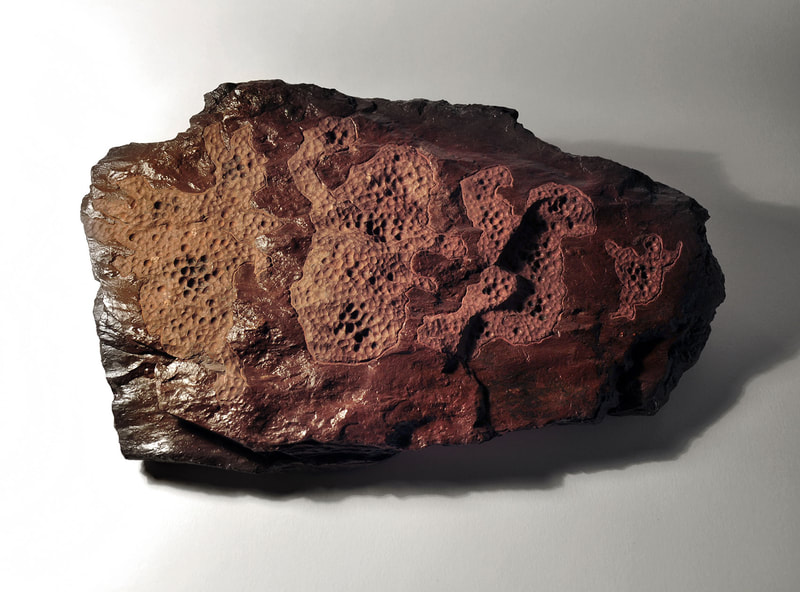 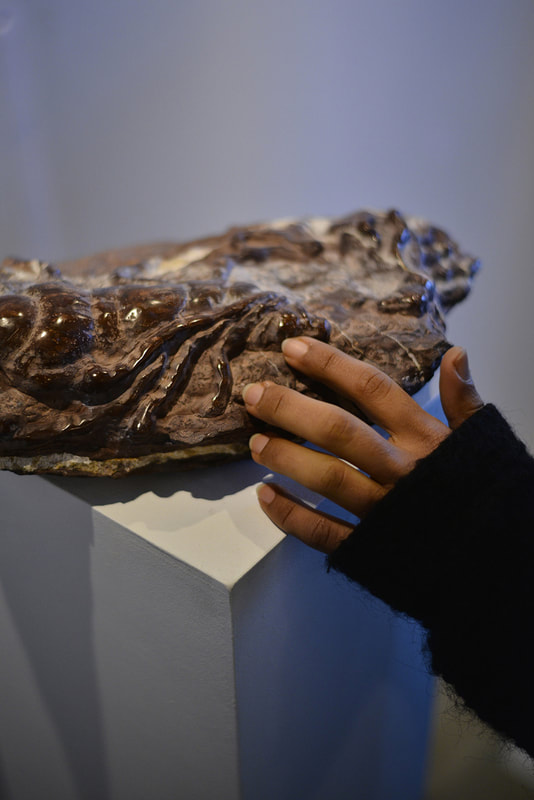 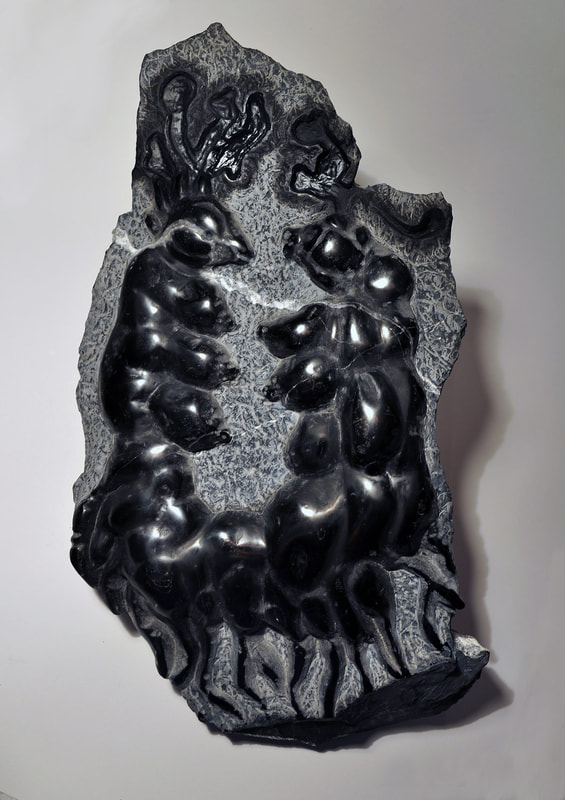